OH_Thursdays: A conversation with António Tomás 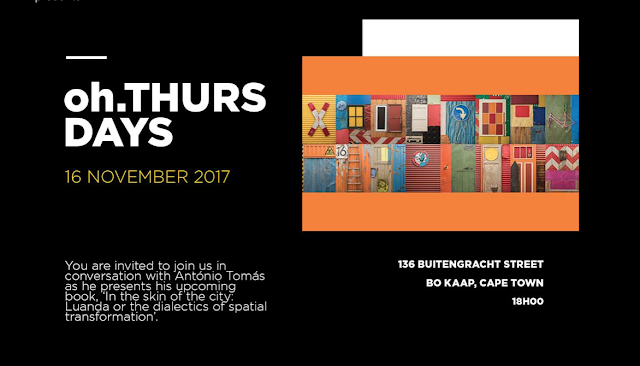 Join us in conversation with António Tomás as he presents his upcoming book 'In the skin of the city: Luanda or the dialectics of spatial transformation'.
RSVP totours@oharchitecture.comlimited numbers applyTIME18H00 - 19h00MEET

ABOUT António Tomás
António Tomás received his doctoral degree in Anthropology from Columbia University, in New York. He is the author of a study on the African nationalist Amílcar Cabral titled O Fazedor de Utopias: Uma Biografia de Amílcar (The Maker of Utopias: A Biography of Amilcar Cabral (Lisbon [Portugal]; Praia [Cape Verde], Tinta da China; Spleen, 2007; 2008). He was the Ray Pahl Fellow at the African Centre for Cities, in 2014, at University of Cape Town, working on a book called In the skin of the city: Luanda, or the dialectics of spatial transformation.He has taught as a permanent staff member and visiting scholar in a number of academic institutions such as Makerere Institute of Social Research, at Makerere University, in Kampala (Uganda), MISR, École des Hautes Études en Sciences Sociales, and Science Po, in Paris (France), and at Stellenbosch University, in Western Cape (South Africa). He is currently a Senior Lecturer at the University of Cape Town (South Africa), with the African Centre for Cities.ABOUT 'in the skin of the city: luanda or the dialectics of spatial transformationIn the skin of the city: Luanda or the dialectics of spatial transformation is a book that describes the process of transformation that the city of Luanda, the capital city of Angola, has been through in the past decades, having the architectural modernist intervention – which started in the 1950s – as the starting point. Additionally, the book engages with the question of Postcolonial urbanism and the ways in which the postcolonial state has dealt with the urbanistic colonial inscription and the imperative for its unraveling.
Posted by Ilze Wolff

Email ThisBlogThis!Share to TwitterShare to FacebookShare to Pinterest
Labels: António Tomás, in the skin of the city, Luanda, Modernism, OH_Thursdays, talks, urbanism