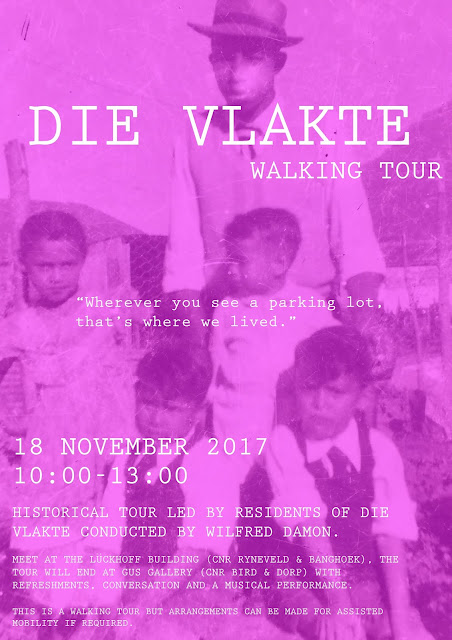 This project evokes the lived experiences of Die Vlakte. Die Vlakte was demolished between 1969 and 1972 as part of apartheid’s project of separate development and forced removals of racialised people of colour from the centre of Stellenbosch.

Residents of Die Vlakte, led by Wilfred Damon, will take the audience on a tour of their memories behind contemporary Stellenbosch. "Wherever you see a parking lot - that's were we lived". The tour will be given in Afrikaans, translated into English.

The tour will end at GUS with a music performance of live guitar by Wilfred, discussion, refreshments and distribution of the second edition of pumflet ‘gaiety’ - a publication of Wilfred’s recollections of Die Vlakte based events: the earthquake interrupted screening at Gaiety Bioscope and the non-screening of La Bohème. pumflet: 'gaiety’ compiled by Ilze Wolff, Wilfred's daughter, architect and artist, is part of a serial publication co-founded with artist Kemang Wa Lehulere in 2016.

The project is made possible by the generous support of students from Stellenbosch Gradex 2017, coordinated by Nicolene Burger.