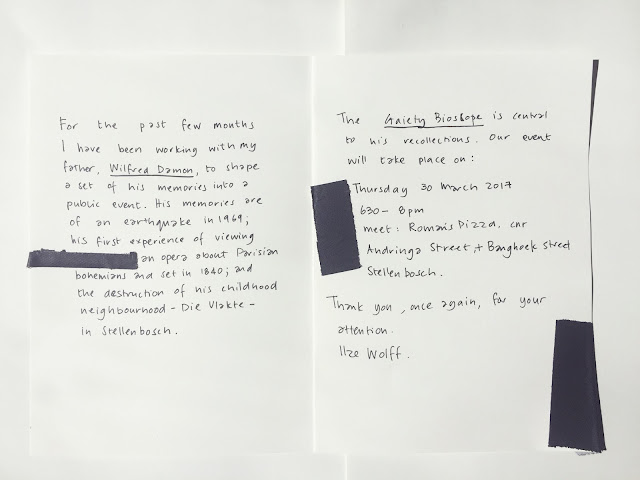 My father, Wilfred Damon, has written down his memories of going to the Gaiety Bioscope, the cinema that once stood in Andringa Street in an area that was known as Die Vlakte in Stellenbosch. Die Vlakte was demolished between 1960 ad 1970 as part of apartheid’s project of separate development and forced removals of racialised people of colour from the centre of Stellenbosch. Wilfred recalls particularly two stories. The one occurred during the earthquake of 1969, where the film, a typical Hollywood action flick of the late 1960s, was interrupted because of the effect of the tremor. At that moment, he writes, fantasy and reality was confused. Patrons ran out of the cinema feeling as if stepping out of the cinema meant stepping inside a real life extraordinary drama of the earthquake and its after effects.

The second story that Wilfred writes about concerns the Plaza Bioscope, the cinema that was designated for white patrons during apartheid. Back then, films would first be screened at the Plaza, then a week or two later, the same films would be screened at the Gaiety, a cinema for non-white people. He was thrilled to see that the opera, La Bohème was advertised and therefor due to be screened at the Gaiety too. However, he soon realised that those who were in control of choosing the film screenings had no intention of showing La Bohème at Gaiety. My law-abiding father, insulted and dissapointed, decided to break the law and planned, together with his good friend, Leonard Biscombe, the projectionist at the Plaza, to pretend to be his assistant and in that way watch Puccini's famous opera.

The legacy and brutality of forced removals have left deep scars in the fabric of the city. Narratives of trauma have dealt with the issues around dislocation, belonging and return. Ideas about home is a key theme in many of the narratives. But how is imagery of the social imagination remembered and dwelled upon?

Pumflet ‘Gaiety’ is a publication of Wilfred’s recollections of both events: the earthquake interrupted screening at Gaiety Bioscope and the non-screening of La Bohème.

Wilfred will give a tour of Die Vlakte and Pumflet ‘Gaiety’ will be distributed at the event: a screening of La Bohème on the site where the Gaiety once stood, nearly 50 years ago. The sound of the screening will come from car audio systems loud enough to set the mood of an earthquake. Through the visual screening we recall the memory of the Gaiety, and dwell on the emotions linked to the non-screening of La Bohème at Gaiety and my fathers’ act of watching it at the white’s-only Plaza cinema. Disappointment, anxiety, resistance, rapture, nostalgia, loss, and trauma are the emotions that direct the mood of the intervention and Pumflet ‘Gaiety’.

'Pumflet' was co-founded by architect Ilze Wolff and artist Kemang Wa Lehulere in 2016. It exists to publish interventions into the social imaginary.
Limited edition Pumflet 'Gaiety' will be available for sale at the event.

Pumflet 'Gaiety' is an intervention specially conceived for the Hiervandaan public art festival hosted and organised by the Stellenbosch Outdoor Sculpture Trust (SOST). Thank you to the following people: