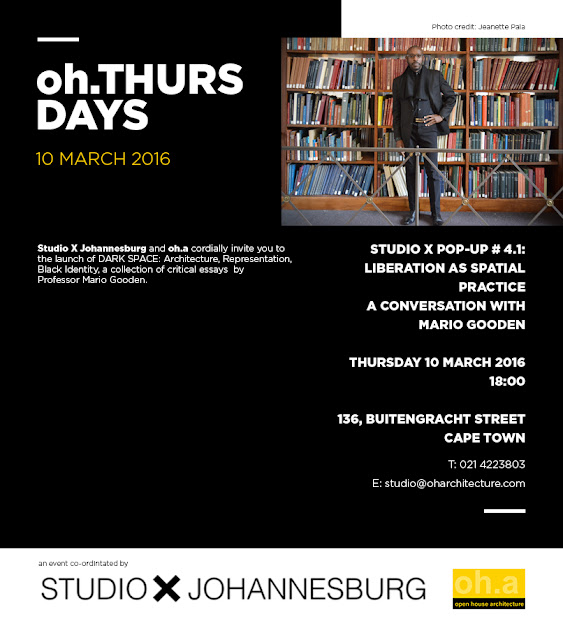 oh.a collaborates with Studio X Johannesburg to invite you to the launch of DARK SPACE: Architecture, Representation, Black Identity, a collection of critical essays  by  Professor Mario Gooden.

Mario Gooden is principal of Huff + Gooden Architects and a Professor of Practice at the Graduate School of Architecture Planning and Preservation (GSAPP) of Columbia University where he is also the co-Director of the Global Africa Lab (GAL). He is a 2012 National Endowment for the Arts Fellow and a MacDowell Colony Fellow. His firm’s work has been featured in journals and publications including Architecture Magazine, Architectural Record Magazine, Metropolis, The New York Times, Architecture & Urbanism (A+U) and ARTFORUM International Magazine. Huff + Gooden Architects work has been exhibited at the International Exhibition of Architecture Biennale in Venice, Italy, the Netherlands Architecture Institute (NAi), the National Building Museum in Washington, DC, and the Municipal Arts Society in New York.

Gooden’s work, writings, and lectures frequently examine art + architecture and the spatial politics of race, class, gender, and technology. His firm is currently designing the California African American Museum in Los Angeles. He previously worked in the offices of Zaha Hadid in London and Steven Holl in New York. His urban and cultural theory research was published at the Dubai Initiative’s Urbanism in the Middle East: A Search for New Paradigms in 2011 and Layered Urbanisms (Yale University, 2008). He is the editor of Global Topologies: Converging Territories (Columbia University, 2013). Gooden teaches advanced architectural design and theory at Columbia University where his studios focus on global topics and cultural theory. His book, Dark Space: Architecture Representation Black Identity (2016), is recently published by Columbia University Books on Architecture and the City.

Read 'The Problem with African American Museums' an excerpt from the book published in the Avery Review below:

Read an article in Art Forum about the chapter in the book regarding Amaza Lee Meredith, a self-taught black woman modernist architect, practicing in the 1930’s in central Virginia below:

Studio X Johannesburg is a creative research laboratory in a global network of studios that explore the future of cities curated by architect and scholar Dr Mpho Matsipa.

Email ThisBlogThis!Share to TwitterShare to FacebookShare to Pinterest
Labels: OH_Thursdays