Architects are, as a rule, not good to each other. Whilst doctors and lawyers are known to cover for each other’s mistakes and Hollywood actors gush over each other’s work, architects (members of the world’s second oldest profession) can be catty and cruel to each other like the girls in a brothel-house. Which is probably why architects should never marry other architects.
Architectural criticism comes to us far more naturally than architectural praise, and we’re often embarrassed when asked to name favourite buildings and to intellectualise why. It’s a very personal question, akin to describing why one finds a girl or boy attractive. In the Cape it’s even more difficult. Contemporary British architect Piers Gough said to me that he thinks of Cape Town as a triumph of town planning and decent, ordinary architecture: There are precious few modern jewels in this city.

Adèle Naudé Santos and Tony de Souza Santos were the “it” couple of the Cape architectural scene in the late sixties and early seventies; glamorous, sophisticated and internationally-educated. For a city drunk on its own innate beauty, Cape Town struggles to produce modern domestic architecture of significance or import, but in the five short years from 1967 to 1972, the Santos’ wrought seven profound homes and townhouses and two extraordinarily complex and wonderful apartment blocks to the south of the city in Rondebosch, Newlands, Claremont, Kenilworth and Simons Town. They retain deity status (deservedly so) in South Africa’s somewhat necrophilic architectural circles, where the dead, the retired and the emigrated are revered - though not always unfairly.

"As a team, they left deep impressions on our architectural landscape, marks that are as relevant now as they were 40 years ago when the buildings were constructed," says architect Ilze Wolff, director and founder of Open House Architecture, an organisation dedicated to the promotion of (and access to) often-maligned 20th century modern architecture, "however all of these impressions reside in the domain of the private house, inaccessible to the general public."

Top Gear’s Jeremy Clarkson lamented the decommisioning of the supersonic airliner Concord as a great leap backwards for human technology and similar might be said of the suburban neo-classicism that followed the Santos’ modernism in the eighties and nineties. Together, the Santos’ probably doubled the city’s inventory of exceptional modern architecture, and surprisingly little has been produced since.

The Santos' had long since emigrated and have been brought back to South Africa as part of the Open House series of architectural tours of extraordinary private homes organised by Ilze, who has also written and published a comprehensive monograph to coincide with the tour. The Santos' today both hold senior academic positions in the USA. Says Adèle: “I’m Dean of M.I.T...”, at which point Tony interjects, “... and I’m professor at New Jersey Institute of Technology.”

“Okay Tony, you do the talking,” snapped Adèle in front of a group of over 200 other architects and enthusiasts last week outside Iona Court in Newlands - a rather awkward spin on the archetypal long-married couple who finish each other’s sentences. The tone between Adèle and Tony was cool, which is unsurprising since this was the first time that they had seen each other in over twenty years, having divorced in 1984.

Adèle is elegant and striking. She has Diane Keaton’s brunette bob with silver bangs, but with Woody Allen’s thick-rimmed glasses and dressed like a tweeded version of the high priestesses of Krypton from Richard Donner’s 1978 Superman film - sporting an architecturally tall, turned-up collar. Photogenic aesthetes Alexander Geh and Christiaan van Aswegen of AGH Architects (also married) drew my attention to Adèle’s obscenely-tactile necklace of large, furry brown balls that appeared almost taxidermied against her bosom. Tony wore a white beard.

The Santos' Cape Town oevre is baroque and sculptural in the vein of Le Corbusian modernism that was also pioneered at the time by the late Roelof Uytenbogaardt, architect for UCT's brutalist Sports Centre and the academically-revered-yet-popularly-reviled, off-shutter concrete Werdmuller Centre in Claremont that now faces demolition. Whilst the Santos buildings were similarly cast in beton brut they have (almost without exception) been painted over in white PVA, making them instantly more palatable to the lay public.

The tour through the private houses (House Stekhoven in Newlands and House Shear in Simons Town) evokes a perverse nostalgia for the simple, understated luxury in which middle class South Africans used to live: White bagged brickwork, warm terraces and arcadian landscapes. Adèle is descended from Cape Afrikaner aristocracy, is grand niece to the late artist Hugo Naudé and daughter of the late architect of the same name, whose firm (Meiring and Naudé) built major apartheid edifices such as the Cape Town Civic Centre.

The small dinner in honour of the Santos' was hosted later the same night at the Camps Bay home of one of the doyens of South African architecture, Gawie Fagan, whose name Adèle Naudé would later seem not to know how to spell. The Fagans' frequently published house, an effortless conflation of Cape Dutch and Le Corbusian modernism, was left unlit like Thomas Vinterberg's 1998 film, Festen, as the sun went down over the sea, with just one minimalist incandescent bulb hanging over the dining table lighting us chiaroscuro like a Caravaggio painting. Tony was with his glamorous second architect wife, and suggested to the table over dinner that the marriage to Adèle (still at the table) was designed, in the main, so that he might take advantage of her U.S. residency status.

Not only did Adèle have a green card, but Tony had married into family patronage. Iona Court in Newlands was built for Adèle's uncle and Damian Court in Kenilworth for her mother. The remainder of the work (the private houses) seems to have been built for family friends. Adèle mentioned her family's insistence on an antenuptual contract, and humorously recalled their David Lynch registry office wedding which was presided over by a dwarf marriage officer.
Damian Court in Kenilworth is almost impossibly beautiful. A large, sculpted concrete cube set in a mature garden, the four baroque duplexes (two upstairs and two downstairs) are orientated due north towards the lush, forested back-end of Table Mountain and Devil's Peak, protected from the afternoon sun by a gridwork of six large, planted balconies that form an astonishing floating concrete brise soleil, preceding the present fashion of "green walls" by about 40 years. A tree would be planted in thick soil on your living room balcony and grow up through a hole in your master bedroom balcony above. The flow of vegetation from apartment, to garden and up to the sylvan mountain forests appears seamless.

Although the building is cubic in envelope, the rooms themselves are brilliantly sculpted and curvaceous, sometimes overwrought and claustrophobic, with twisting Maurice Escher staircases seemingly designed for the exclusive use of the Santos' vertically-challenged marriage officer.

I've aspired to live in Damian court since I was a teenager, and once tried to persuade my overweight father to buy Adèle's mother's upstairs duplex when it was on the market. When the estate agent Rhonda Raad (now my stepmother) took us to view the flat, she and I took the labyrinthian scissor stair as there was room only for my father in the lilliputian lift, and even then he struggled to rotate himself around to the control buttons. Impossibly beautiful.

In Rondebosch, Adèle had persuaded her uncle to demolish his large Victorian home where soires used to be held in the large grounds and replaced it with an ingeniously complex and svelte three storey block of trapezoidal student flats, lorded over by a larger triplex apartment with roof garden for the owners at the front. Adèle explains that the uncle and aunt reneged on their promise to junk their over-sized ball and claw furniture, hoarded possessions like magpies and eventually crowded themselves to the point that they were compelled to abandon the building altogether. For three years I owned the front flat at Iona (as a compensation for not getting my father into Damian) and can only imagine the units being furnishable with custom-made pieces to fit the acute corners of the rhomboid rooms. As with religion, you have to believe in these buildings and make certain sacrifices in order to live this dream.

At House Stekhoven, an undulating garden pavilion house with rolling gardens and its own river running through it, celebrity architect Stefan Antoni said he felt shivers down his spine. House Shear in Simons Town is more a cliff-side look-out tower than a dwelling house: The dusty, incremental old wealth atmosphere was supported by a sun-faded library, floor-to-ceiling views over False Bay and a Cecil Skotnes painting propped up nonchalantly on the living room floor.
It's tempting to try to tease out which of the duo was the design mind and which was the schlepper, but an analysis of both Santos' portfolios in the years between 1974 and today, indicates that A+A De Souza Santos were indeed greater than the sum of their parts. There's a recognisable golden rationalism, sense of proportion and rigour in Tony's later work, as well as a similarly recognisable feeling of whimsy, playfulness (and impossible staircases) in Adèle's somewhat more prolific recent projects, but it remains the Cape Town work from 1967-1972 that forms the incandescent part of their respective CV's.

Adèle mentioned to me that night at House Fagan that she and Tony had always particularly admired CM Sherlock’s impossibly spindly and curvaceous Holyrood which they used to walk past daily through the Gardens, a baroque block of tiny bachelor studios with a reputation for holding its inmates in its gravitational thrawl, and a building with which I’m so personally enthralled that I made the 2009 mockumentary The Satyr of Springbok Heights in its honour. There are spinsters at Holyrood who've chosen their 35m2 apartments over their lovers, so my partner and I knocked three of those flats together just in order to stay there, having tunneled down to a completely different floor in order to link the third unit via a familiarly tortuous winding staircase. The only thing that stopped us from moving into our mad trapezoidal Iona triplex was Holyrood’s impossible pull.

I'd always dreamed of living in Damian Court and I'd always dreamed of living in Holyrood. Out of the thousands of soulless sectional title apartments across Cape Town, there is only a small handful of blocks  in which people actually aspire to live, and with which certain of the inhabitants actually begin to invest their own identities. Even when inmates escape the nest, they form a diaspora of proud former residents who retain an identity, a connection to those special buildings. And the Santos' built precisely those kinds of buildings. Adèle has met people all over the world who’ve fondly told her of some wonderful past life at Iona.
That both House Stekhoven and House Shear remain occupied by their original families speaks of a similar power and of a similar connection, and in a country increasingly obsessed with individualism and the disposable false luxuries of finish and technologies and of trappings and gloss, these buildings still offer us lessons in the virtues of collaboration and modesty and of genuine comfort, sustainabilty and the captured imagination.

Robert Silke is partner in charge of design at Louis Karol. 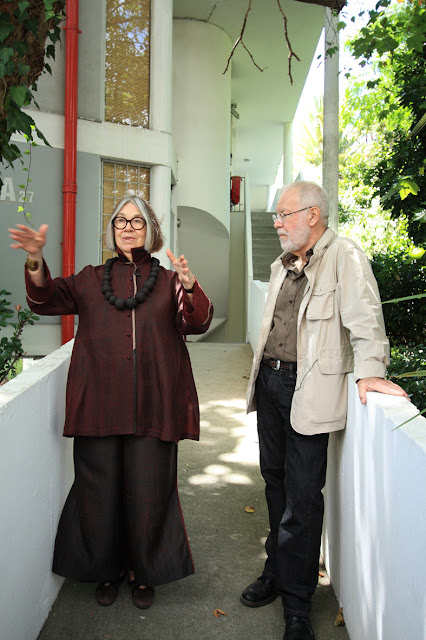 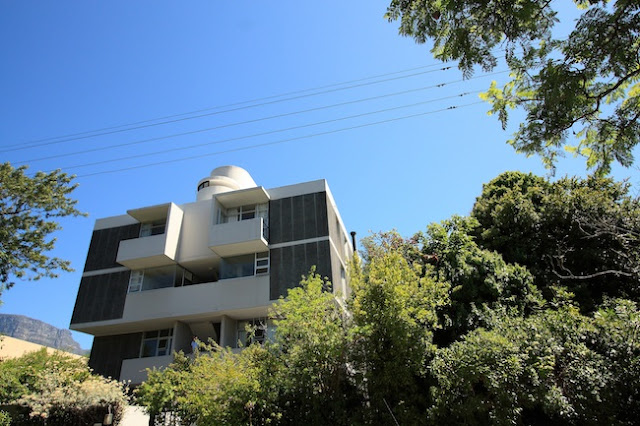 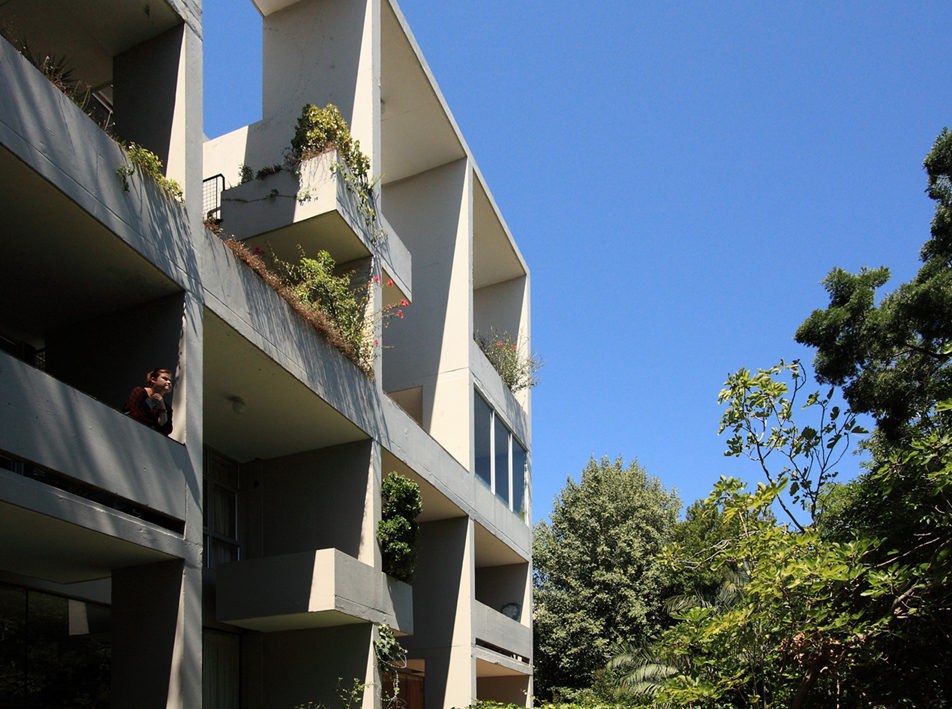 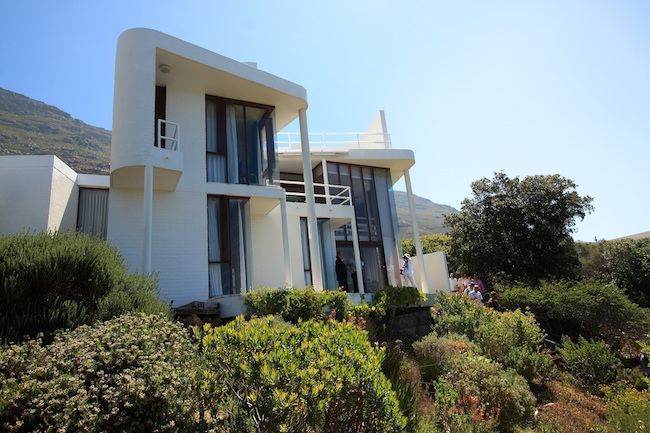 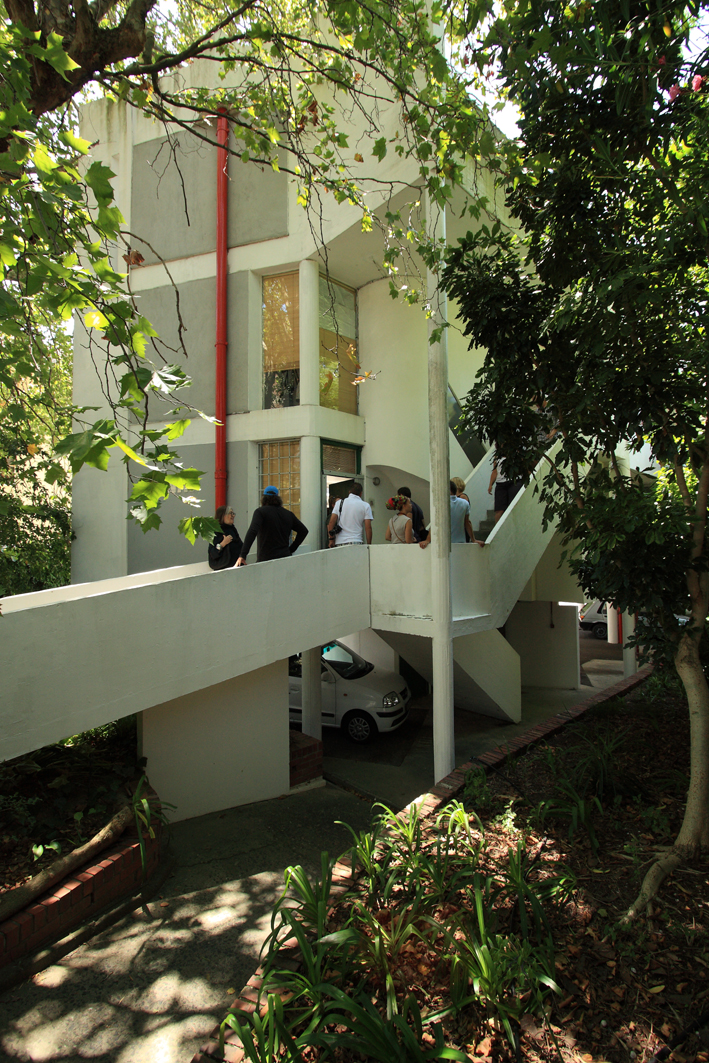 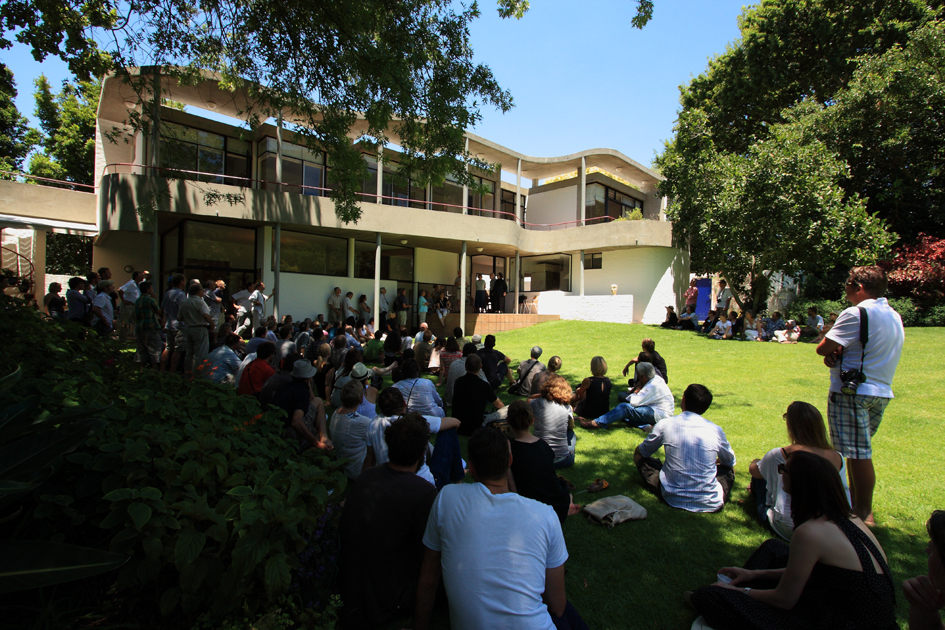 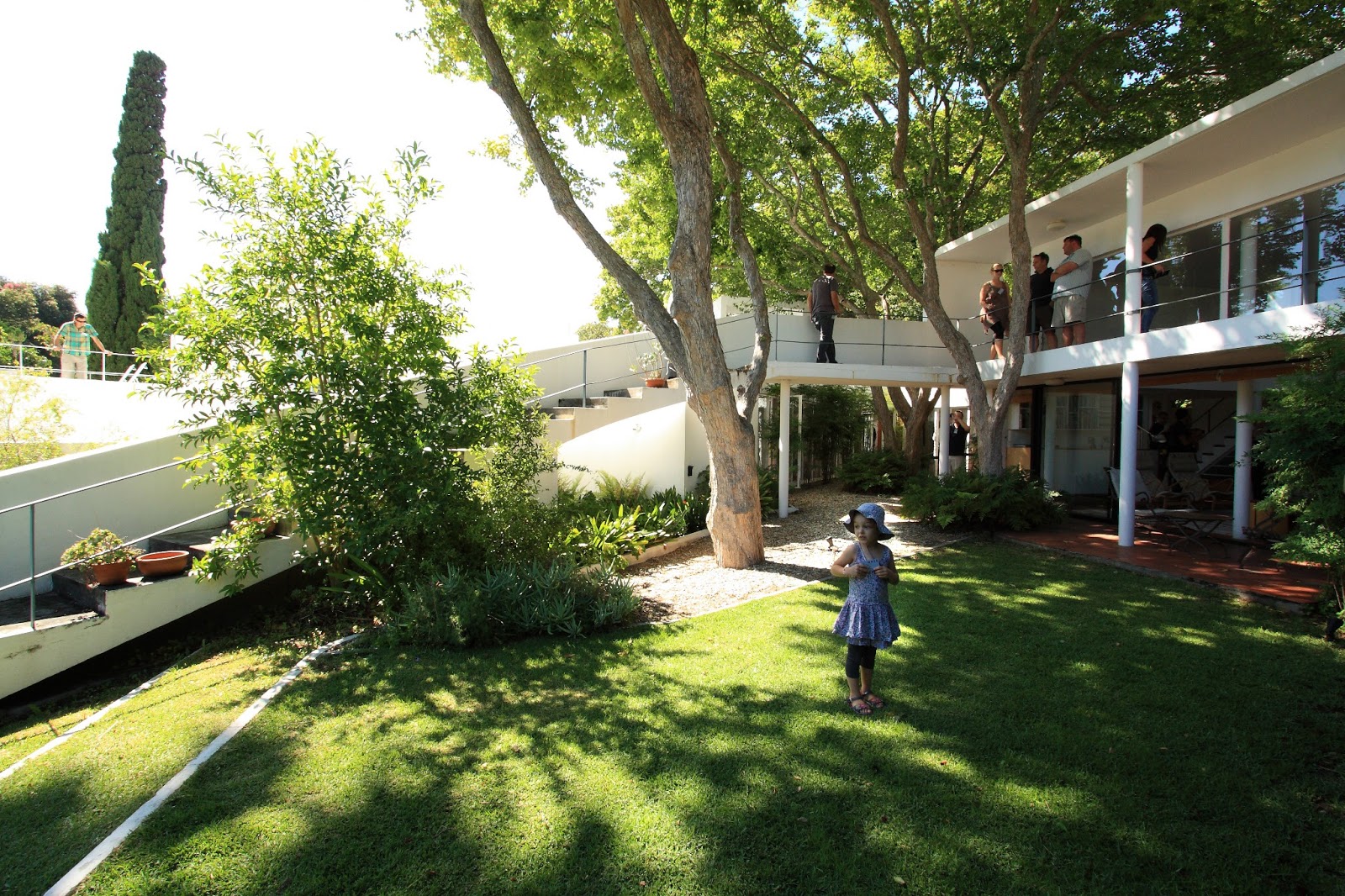 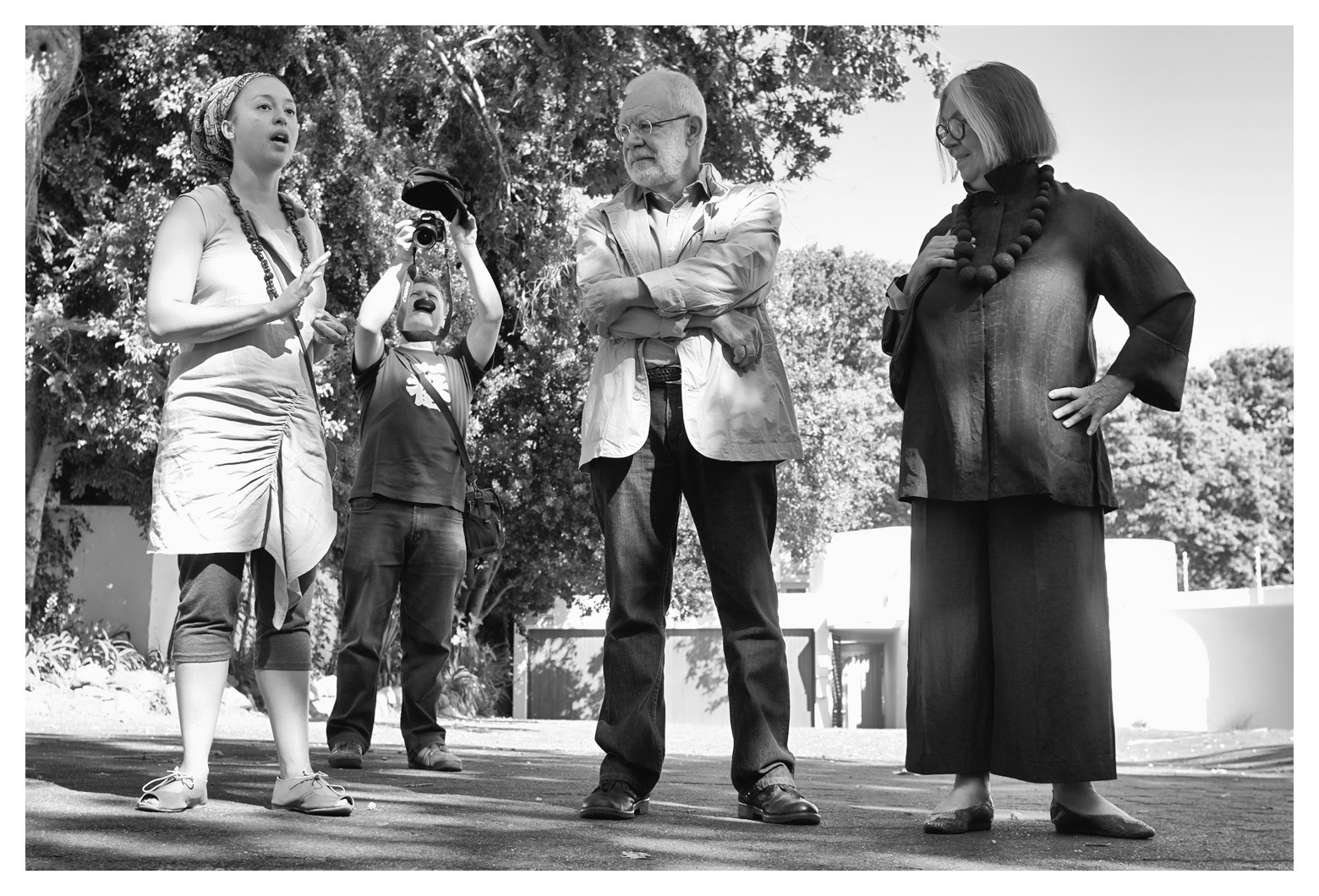